For my first post, I thought of presenting myself by talking about my approach to music discovery and the underlying sensitivity which characterise my tastes – it means I will probably digress into formulating half-assed theories about listening to music.

But first a small word on how I got here. Through JQBX of course. When I first tried it, my mind was blown as I spent one evening discovering so many excellent tracks with a bunch of crazies. From then on I was hooked, but I didn’t encounter them again and I made other friends, and developed some habits as I started to map the community. I was sharing my time between electro and indie rooms but I still missed a large spectrum of genres I like: the weird and outlandish. So I created this room, Interesting Sounds Assembled By Humans (isabh), to listen to my stuff and maybe catch some roamer in my nets.

I was listening to an excellent minimalistic piece by James Holden and Camilo Tirado (which creation process is interesting on its own too [1]) when this guy arrives in the room and, surprisingly, stick around for the whole piece. Turns out this guys was our own Shroom, and that this initial epic jam that got me hooked to JQBX in the first place was most probably constituted of this excellent crowd, the Lanky Bastards.

I still visit genre rooms, but not nearly as much as before.

But why being hooked to JQBX in the first place? Well, Spotify recommendations often end up going in circles and researching stuff takes a lot of time which I don’t have readily available. In my experience, the most efficient way to discover music which I end up loving, is through a chosen few’s preferences. The human brain is actually a pretty powerful sound wave analyser. Perhaps surprisingly, the brain of other people which initially don’t know a flying fertiliser about my tastes in music tend to do better than algorithms which have years of listening habits to learn from.

It’s a well established scientific fact that music (discovery) acts similarly to drugs or sex [2, 3]. It requires to balance expectations and surprise, but what you get in return is dopamine and stimuli going straight to your pleasure center (the nucleus accumbens). As you get used to some musical patterns, the element of surprise goes away and you have to hunt down for new neighbouring highs. But when you listen to a new piece and the due drop comes, or this unexpected but natural chord is struck, what a kick!

There are a few rare tracks which I really love because of how they take me by surprise. They are not clamouring the full program from the start. They keep some of it for later. It’s not really about having a radical change of rhythm or chords, you have plenty of this and while it’s not as simple as playing two tracks without pause, it’s still a cheaper way to create surprise. It’s not about solos either. Some solos elevate a recording to the pantheon of releases, but it’s not it. It’s not just a crescendo. I like some good crescendo – I have a weak spot for it even. But crescendo tracks often build up in a pretty predictive way and despite the clear satisfaction of having the craziness unleash gradually and according to plan, you don’t often have this feeling of “hey, that’s awesome!”. It’s more like “wow, that was good” after the fact, happy that the band didn’t fuck up somehow.

I initially wanted to talk about how good is unexpected harmony after reading Joja’s comment on Outro by Vulfpeck in his introductory post and finding that I felt exactly the same:

Less than 10 seconds into the song after those crispy drums set in I’m thinking “Daaamn this is good”  and immediately start rocking in my chair. Cue the saxophone – “Oohhh fuck yes” – and I’m getting this warm feeling of joy rising in my stomach as I sense the funk spirit possessing me, lifting me up to dance in my room with dangerously intense head bobbing.

Un exemple vaut mieux qu’un long discours . I have a few personal favorites drawn from many genres, which I put together in a playlist. I will not spoil them with any comment. We never know, maybe, dear Reader, you will hear what I hear and enjoy it.

Despite the basic mechanisms driving attraction to music being the same, we don’t listen to the same stuff, we don’t like the same stuff. Our brain picks up different things to be the star of a track, leaving the rest to be flavour enhancers. I am convinced that music is an emotional thing. Groups of people agree only because their brain have been somehow shaped to have similar neural paths crossing their subconscious . When people don’t agree but feel strongly about their opinions, the debate tends to spiral into technicalities and arbitrary statements ultimately leading to a diverging set of references or composition being turned into a primarily academic endeavour.

The task of explaining ones musical taste usually leads to pretty underwhelming results. We end up sharing some names and ill-defined jargon and disappointing turns to tedious. Or we just embrace failure and say “I listen to everything”, and everybody knows that it is not true but at least we can move on to talking about the weather.

Still, even though I’m certain that whatever word I use for describing what I like in music will not be understood as intended, I still enjoy trying to summarise my preferences in as few statements as possible. But not now. I’ll just link to my Starred playlist in all its glory and shame (I still removed toto from it for the occasion) and my RYM ratings which is my latest attempt at organising my music (5% loaded)

That leads to probably the most important aspect of music which not only shapes ones favorite oldies, but probably also the things we like to discover in new releases: people. To a large extent, music discovery is not about the music, but about the people you share it with. The music our parents listened to, the tastes developed with our fellow snotty friends when we were young enough to be acceptably dumb, the artist a dear friend introduced us to but to whom we can’t recommend anything anymore.

One thing is for certain, whatever happens, part of my collection will always sound lanky to me. 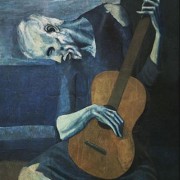